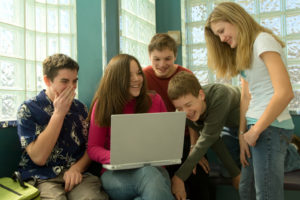 At the beginning of the month, the Pew Research Center published their most recent report on teens and technology entitled “Teens, Social Media & Technology Overview 2015”. The Pew Research Center always provides great insight into the use of technology by both adults and teenagers. This report, taken from data obtained in the fall of 2014, continues to provide helpful insight. Though others have published on this topic earlier in the month, I wanted to take the time to write about the report in the context of my work in prevention and parental education.

The results of the survey are interesting not just because they provide some idea of what teens are doing in the mobile world, but the study also highlights the differences in usage between genders, race and socioeconomic classes.

Most American teens have a mobile phone and almost 75% of all American teens have a smartphone. These numbers are higher for African American teenagers. 68% of all teens age 13-14 have access to or have their own smartphone. These teens are using the internet all the time, with 24% of teens saying that they are on the internet “almost constantly” and 56% saying they are on the internet several times a day. Minority teens are going online more frequently than white teens and teens from wealthy families are online less than those from lower income families.

We all know that teens text and they text a lot. However, what many parents don’t realize is that their teens are not necessarily just texting via their phone, they are also texting via messaging apps. The study found that 91% of teens text and 33% of teens surveyed text via apps such as Kik or What’s App. Minority teens and teens from lower income families are more likely to use messaging apps and girls are more likely to use messaging apps than boys. The important message for parents here is that you need to know what messaging apps are out there and what apps your kids are using.

Anonymous apps such as After School and Yik Yak have been in the news frequently, mostly dealing with problems of cyberbullying. The study found that 11% of teens reported using these apps. Hispanic teens were two times more likely to use these apps than white teens. These numbers are actually good news. Though the negative features of these apps often make sensational headlines, the number of teens using these apps is relatively small.

Many parents may not be aware that teens use video chat apps with some frequency. This could be the more widely known ones such as Skype and Facetime or lesser known avenues such as Oovoo or Omegle. Parents need to gain some knowledge in this area since almost half of teens are talking (47%) in this manner. Girls video chat more than boys.

I really appreciate the data we get from these types of surveys. As an adult and a digital immigrant, I am often not the first to know about what apps and technology teens are using. The data from Pew is generated directly from teens themselves and gives us a better picture of what they are doing in the digital world. It also gives parents an idea of what they need to be aware of regarding their children’s use of technology.
Though surveys are great, I will end this post with the writings of an actual teen. The post seen at https://medium.com/backchannel/a-teenagers-view-on-social-media-1df945c09ac6 does not have an author listed so I can only credit the 19 year old college student who wrote it anonymously. I love this post as it is written by an actual teen, not an adult talking about what teens do. You can read his post for full details but here is his breakdown of a party, which I love:

“ You post yourself getting ready for the party, going to the party, having fun at the party, leaving at the end of the party, and waking up the morning after the party on Snapchat.

On Facebook, you post the cute, posed picture you took with your friends at the party with a few candids (definitely no alcohol in these photos).

In summary, as a parent, you have to be aware of everything that is out in the digital realm. It is likely we will always be a bit behind the eight ball unless we are hard core techies ourselves. Studies like this from Pew help us get a leg up on understanding what most teens are doing in this period of time, which is likely a better barometer than the sensationalized media.

For more information on Dr. Weeks Prevention Project: The New Age of Sex Education: How to talk to your teens about cybersex and pornography, please click here.

Dick Pic Culture: How do Teenage Girls Navigate it?

The New Age of Sex Education

An individual concerned about your behavior, in need of counseling, or in legal trouble?

An attorney looking for scientific research for a sentencing report? Or would Dr. Weeks’ forensic services, case consultation, or investigative reports better suit your needs?

A medical professional looking for research on addiction or dealing with impairment issues?

What are the Risk Factors for Father Daughter Incest?

This study, with over 2000 participants, explores the risk factors that can lead to this less researched form of childhood sexual abuse, known as Father Daughter Incest or FDI. [...]

Were Men with Paraphilic Infantilism Mistreated in Childhood?

Does the data show that childhood mistreatment leads to pedophilic behaviors? Is there a correlation between adult baby/diaper lovers (ABDL) and pedophilic desires? [...]

How does indulging in the Adult Baby/Diaper Lover (ABDL) fetish affect the view those who are being investigated or arrested? [...]

This website uses cookies to improve your experience while you navigate through the website. Out of these, the cookies that are categorized as necessary are stored on your browser as they are essential for the working of basic functionalities of the website. We also use third-party cookies that help us analyze and understand how you use this website. These cookies will be stored in your browser only with your consent. You also have the option to opt-out of these cookies. But opting out of some of these cookies may affect your browsing experience.
Necessary Always Enabled
Necessary cookies are absolutely essential for the website to function properly. This category only includes cookies that ensures basic functionalities and security features of the website. These cookies do not store any personal information.
Functional
Functional cookies help to perform certain functionalities like sharing the content of the website on social media platforms, collect feedbacks, and other third-party features.
Performance
Performance cookies are used to understand and analyze the key performance indexes of the website which helps in delivering a better user experience for the visitors.
Analytics
Analytical cookies are used to understand how visitors interact with the website. These cookies help provide information on metrics the number of visitors, bounce rate, traffic source, etc.
Advertisement
Advertisement cookies are used to provide visitors with relevant ads and marketing campaigns. These cookies track visitors across websites and collect information to provide customized ads.
Others
Other uncategorized cookies are those that are being analyzed and have not been classified into a category as yet.
SAVE & ACCEPT
Powered by