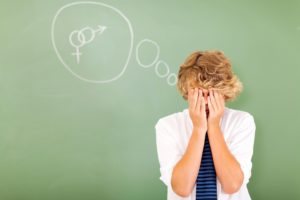 I am working on the chapter of my book, The New Age of Sex Education: How to talk to your teen about cybersex and pornography, that deals with why parents don’t talk to their kids about sex. In doing research on the topic, I came across a survey done last year by a company in the UK called Lil-Lets. In September of 2014, Lil-Lets published the results of a survey they conducted. The survey asked parents questions related to talking to their children about uncomfortable sex education topics, everything from puberty to menstruation to sex. Unfortunately, the results of this survey line right up with other research findings and what I find in clinical practice. Parents are embarrassed.

The study surveyed 2000 parents. Sixty percent of these parents stated that they have a hard time talking to their children about sensitive topics. This meant not just talking about sex itself but also the biology of puberty and sexual development. Half of the parents stated that they found talking about these topics embarrassing. Apparently “the talk” causes a great deal of anxiety for parents, some of whom reported worrying about having to have a sex talk with their child from the time their child was around four years old.

A surprising finding from the survey was how disconnected the parents were from each other when it came to talking to their child about sex. Instead of working as a team and parenting together, 41% of the parents reported arguing with each other over which parent was going to talk to their child. Some of the survey participants even stated that they and their spouse had come to blows while arguing about the topic.

Despite all the anxiety and fighting that may go into the preparation for “the talk”, more than 50% of parents did eventually have the talk with their child. The concerning statistic for me and my work is that four in ten parents admitted to completely avoiding talking to their children about the topics including sex, relationships and puberty. This is what I often hear from my clients who are struggling with pornography addiction. No one talked to them about sex. They had to rely on school sex education programs and most of those do not talk about pornography, sexting or other digital and current topics.

Parents who do not talk to their children about sex at all are leaving their education up to school, but this education is often supplemented by peers and the internet. Many of these kids don’t get accurate information about sex and relationships from peers and the media.

The sex education of children needs to involve parents and perhaps start with parents. Research shows that children want this information from their parents (see other posts). Why are parents embarrassed to talk about sex with their children? Those parents with biological children had sex to create them. If we can have sex, shouldn’t we be able to talk about it?

Parents need to learn how to have difficult conversations. Learn to bite the bullet and just talk to their kids. One uncomfortable conversation can result in a closer bond with your child and a child who feels like they can come to you to talk about hard things. As a woman I met yesterday told me, it all starts with the parents.

Many parents have no model for how to talk to their children about sex and sexuality. Often, their parents never talked to them or they got messages that sex should be secret and not discussed. This is the reason I am writing The New Age of Sex Education: How to talk to your teen about cybersex and pornography. Parents can learn how to successfully have these conversations.