The Marshmallow Test: What Children Have Taught Us About Willpower 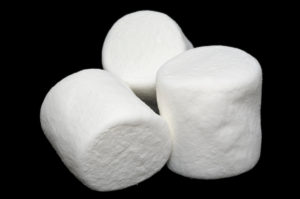 Recently, a client shared that he had listened to an NPR podcast whose topic was the Marshmallow Test and the research of Walter Mischel, Ph.D. He had also watched a short youtube video that showed a modern version of children trying to resist the marshmallow. The video is cute and funny and provided him a visual cue to hold onto when he is struggling to successfully manage cravings to act out.

The marshmallow test, as it is known now, is a bit of a misnomer. The research studies looked at children’s ability to delay gratification. They let the children pick a treat that they wanted, for some this was a marshmallow and for others this was something such as an Oreo cookie. The children were then told that they had a choice. The researcher was going to leave the room and the children could ring the bell at any time to bring them back. If they waited until the researcher came back on their own, the child would get two treats, such as two Oreo cookies. If they rang the bell to bring the researcher back, they would only get one treat. The researchers then studied reaction times and the coping mechanisms of the children. Though this is an extremely simplistic overview of 40 years of research, the studies helped us learn about a person’s ability to delay gratification (get two treats) or willpower.

Through their many experiments, the researchers came to identify two systems that they called the hot system and the cool system. The hot system is our impulsive, reactionary system. Our cool system is the system that uses rational thought, including thoughts about consequences. It is postulated that there are times when the hot system simply overrides the cool system and we act impulsively or without thinking about the consequences of our actions. This framework allows us to create tools to help the cool system prevail. For example, when the researchers asked the children to think about the savory aspects of the marshmallow, such as how it would taste or feel when they eat it, they ate the marshmallow sooner. When they asked the children to think about the marshmallow in less “hot” system terms, such as focus on shape or to think of it as a cloud, the children were able to delay gratification better.

How does this apply to recovery? One thing that comes to mind is the tool that is suggested for sex addiction recovery to deal with objectification. This is called the three second rule. There are many variations on the rule, but the basic premise is: if we notice a person who is triggering, one version is to acknowledge the trigger in the first second. The second version provides the opportunity to humanize or personalize the person. For example, some people will have a mantra in their mind that states that this person is someone’s wife, sister, mother, etc. Looking at this from the marshmallow lens, the initial trigger is the hot system and the tool we use is the cool system being reinforced. The attraction to a person is reflexive but the tool use is a cognitive choice.

In truth, many of the cognitive behavioral tools that we use are trying to either engage cool system or to reinforce it. If I am dealing with a craving to drink, I can try to engage my cool system by thinking about the consequences of drinking or perhaps how bad I will feel the next day. The hope is that by engaging this rational, logic based system we will have a better chance of successfully battling the craving without a slip.

I love the marshmallow metaphor as it is really much easier for clients to relate to than the technical names of our CBT skills. Personally, I think it is so much easier to think, “don’t eat the marshmallow” than to think about what CBT skill I should use in the moment.

Why did Google Remove Covenant Eyes?

Pornography Use and Erectile Dysfunction

An individual concerned about your behavior, in need of counseling, or in legal trouble?

An attorney looking for scientific research for a sentencing report? Or would Dr. Weeks’ forensic services, case consultation, or investigative reports better suit your needs?

A medical professional looking for research on addiction or dealing with impairment issues?

Were Men with Paraphilic Infantilism Mistreated in Childhood?

Does the data show that childhood mistreatment leads to pedophilic behaviors? Is there a correlation between adult baby/diaper lovers (ABDL) and pedophilic desires? [...]

How does indulging in the Adult Baby/Diaper Lover (ABDL) fetish affect the view those who are being investigated or arrested? [...]

What is the Role of Abuse and Neglect in the Affective Theory of Mind of Individuals with Schizophrenia?

What scientific data says about childhood abuse and neglect in relation to offenders who are diagnosed with schizophrenia. Previous research […] [...]

This website uses cookies to improve your experience while you navigate through the website. Out of these, the cookies that are categorized as necessary are stored on your browser as they are essential for the working of basic functionalities of the website. We also use third-party cookies that help us analyze and understand how you use this website. These cookies will be stored in your browser only with your consent. You also have the option to opt-out of these cookies. But opting out of some of these cookies may affect your browsing experience.
Necessary Always Enabled
Necessary cookies are absolutely essential for the website to function properly. This category only includes cookies that ensures basic functionalities and security features of the website. These cookies do not store any personal information.
Functional
Functional cookies help to perform certain functionalities like sharing the content of the website on social media platforms, collect feedbacks, and other third-party features.
Performance
Performance cookies are used to understand and analyze the key performance indexes of the website which helps in delivering a better user experience for the visitors.
Analytics
Analytical cookies are used to understand how visitors interact with the website. These cookies help provide information on metrics the number of visitors, bounce rate, traffic source, etc.
Advertisement
Advertisement cookies are used to provide visitors with relevant ads and marketing campaigns. These cookies track visitors across websites and collect information to provide customized ads.
Others
Other uncategorized cookies are those that are being analyzed and have not been classified into a category as yet.
SAVE & ACCEPT
Powered by