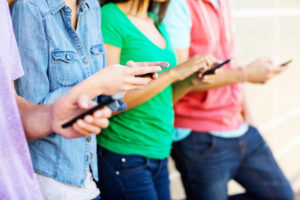 I have not written about new apps for teens lately, as there have not been any new apps that have come to my attention that warrant too much concern. Today, via the blog techcrunch.com, I learned about the new anonymous social networking app targeted at teens called After School.

Unlike its predecessor, Yik Yak, whose target audience was college students, the target audience for the After School app is teens. Therefore, it does not carry a rating of 17+. This makes it accessible to any school age adolescent, be it high school, middle school or grade school.

Since the launch of the app in October, there have already been multiple issues with cyberbullying and threats to schools. A high school in Michigan received an anonymous gun threat via the After School app. The bullying is reported to be so bad on the app that one Michigan High School senior started a petition on the website changeover for the app to be removed from the app stores on multiple platforms. (http://www.wnem.com/story/27540931/students-create-petition-against-afterschool-app)

The creators of the app Yik Yak took the cyberbullying concerns seriously. In order to deal with the issue of cyberbullying in middle and high school, they created geofences in the app that work in the background. These fences make the app unusable within certain borders, including those around schools. According to a Huffington Post article (http://www.huffingtonpost.com/diana-graber/yik-yak-app-makers-do-the_b_5029679.html), the makers of the app, in conjunction with the company, Maponics, have already mapped out 85% of high schools in the United States, enabling the app to be shut down in these zones. If you try to use Yik Yak in these areas, you will get a message that states “It looks like you are using this at a high school or middle school which is not allowed.” Sending and receiving messages is disabled.

The makers of After School, however, do not appear to take the issues of cyberbullying and threats as seriously. What happens if you see objectionable content on the After School app? Here is the company response based on their FAQ page:

“Report it to us. We believe in free speech and the ability of people to express themselves. If you find the majority of the content too offensive, consider using your phone instead to look at cat pictures or browse a less cutting-edge social network like Facebook. However, we are always able to remove posts and block users who are actually abusing the system.”

These apps are not going away. That is a simple reality of the world in which we live. Teens and adults both seem to love apps that allow them to anonymously post their thoughts and feelings. Additionally, there will always be gossip and social issues in schools. Legally, there are lines that can be crossed where free speech does turn into harassment. Personally, I would like to see a little more responsible action on the part of the makers of the app. Address the issue of cyberbullying instead of just telling users to go look at cat pictures.

The app After School was pulled from the app store today and made a reappearance this afternoon with changes. The app now has an age restriction and an 17+ rating. It also allows users to flag content. Apparently, Apple told the developers to clean things up after the publishing of the techcrunch.com blog.

Bravo to Apple for paying attention to public input and for being responsible!