What do kids worry about online? 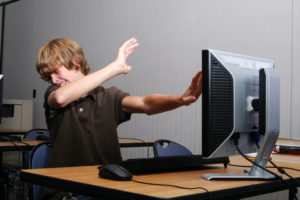 Most research that I review is written by adults from a very adult perspective.  The research topics are based on adult concerns regarding the effects of cyber bullying, sexting and internet pornography on kids, which makes sense because the scientists who are conducting this research are no longer kids.  However, it stands to reason that the adults might be asking the wrong questions and be concerned about the wrong things.  We might wonder why the scientists don’t just ask the teens themselves.

This September, a group of European scientists published a paper in the European Journal of Communication that finally looked at these issues from the perspectives of children.  The report, entitled: In their own words:  What bothers children online? asked nearly 10,000 children aged 9 to 16 about their own perceptions of risk online.  One thing that makes this study really useful is that they didn’t just have kids answer close ended questions.  They allowed them, in their own words, to talk about the things that bothered them online.  These open ended answers were then coded and categorized to provide the data we will discuss.

So what bothers kids online?

The answer is, well a lot.  So to help us understand the authors broke things down into categories:  Content Risk, Conduct Risk, Contact Risk and Other.  The most frequently mentioned type of risk mentioned by kids was Content Risk.  This included many things but the two most common were pornographic content and violent content.

Pornography ranked the highest of all risks mentioned by children.  There was no gender difference, meaning boys and girls both mentioned pornographic content first as the thing they worry about.  Children appear to become worried about pornography as they enter the teen years.  This concern declines as they get older.  A nine year old Irish girl reported that “one time I was looking for a game and rude pictures came on the computer, people without clothes on.”  As evidenced by this quote, the age of exposure to pornography is commonly quite young.

Violent content was the second highest type of content mentioned by the children in the study.  Boys were more concerned about violent content than were girls.  Children between 9 and 10 were most concerned about seeing violent content.  Young children are upset by violence that is fictional, such as seen in fairy tales or movies.  As the children get older and become adolescents, they start to become afraid of real violence such as war and disaster. The findings on violence are worth paying attention to.  Our public policy and mass media pay much more attention to exposure to sexual content online and pay less attention to the exposure to violence by children.

Though we can assume that American children are similar to European children, I would love to see this study done here as well as in other countries and other cultures.  I agree with the authors.  We need to spend more time talking to children about what really worries them.  We know what worries us.  Our worries guide prevention programs and policies.  Our worries guide what we talk to our children about.

Maybe we are spending too much time talking about the wrong things.  We need to spend more time talking to kids about online pornography and violent online content.